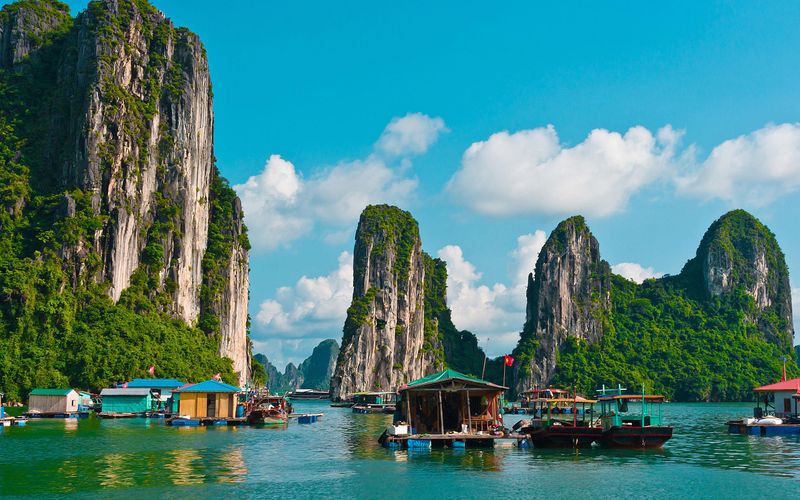 From a culture-rich ancient Hanoi to a vibrant Ho Chi Minh City, from a mystically exquisite Halong Bay to a vast Mekong Delta, this tour will give you a quick yet full view of Vietnam’s North and the South. While sitting on a xich lo through the old quarters’ streets and watching a water puppet show in Hanoi bring a deep touch of culture and nostalgia, visiting the War Remnants Museum and the amazing Cu Chi Tunnel network nearby Ho Chi Minh City will get you to appreciate Vietnam’s graceful yet courageous past. Likewise, cruising through the magnificent maze of craggy karst islets in Halong Bay reminds you how wondrous nature can be. But navigating through the canals of the Mekong Delta on a sampan and interacting with warm-hearted locals is most likely to be an experience of people and land harmony. The contrast of change between two regions will inspire you to utmost delight.

Arrive at Noi Bai International Airport, welcome by our guide and transfer to your hotel. The driving time is approximately 40 munites.


Hanoi or “River-bound City” as its name literally means is Vietnam’s capital with a thousand-year-old history dating back to 1010. The city’s fascinating beauty which is characterized by unique cultural relics, ancient streets of antique houses, elegant French colonial buildings, tree-lined boulevards and romantic lakes has made it one of the most charming cities of Asia.

Morning, start a full day city tour beginning with the Ho Chi Minh Complex, containing the mausoleum of the nation’s founder (closed in the afternoons, on Monday, Friday and through October - November), and his rural style residence with a house on stilts and the Presidential Palace. Also part of this complex is the unique One Pillar Pagoda, built in the 11th Century in dedication to Avalokiteshvara or Buddha of Compassion and reminiscent of a lotus blossom rising from a pond. The tour will continue on with a visit to the Temple of Literature, known as the first university of Vietnam built in 1070 by the Ly Dynasty to honor Confucius, sages and outstanding Vietnamese scholars and the Vietnam Museum of Ethnology showcasing the prominent cultural heritages of 54 Vietnamese ethnic groups.

Afternoon, visit the Imperial Citadel of Thang Long with its ruins and reconstruction, a UNESCO-recognized World Cultural Heritage Site whose history dates back to 1010 and ranging over four dynasties of Ly, Tran, Le and Nguyen. Proceed to the city’s central area to visit Hoan Kiem Lake and Ngoc Son Temple located on an islet in the lake. Hoan Kiem Lake is the center point of Hanoi and home to a rare endangered giant turtle species. Its name “Returned Sword” comes from a legend of a sacred sword being lent to an ancient Vietnamese King by a holy turtle from the lake and later returned to the turtle. Discover special Vietnamese traditional art of water puppetry as well as Vietnamese folklore through a compelling puppet show at Thang Long Theatre.

Morning pickup at 8:00 AM from your hotel for transfer to Ha Long Bay, which is about 160 km or 3.5-hour drive away. On the way, you will see some rural areas of the Red River Delta with plenty of chances to take photos of Vietnamese farmers working in paddy fields. Stop half way to visit a handicraft workshop of fine clothes and embroidered paintings. Arrive in Ha Long City at 11:30 AM and check in aboard the booked junk right after the welcome drink is served. Start cruising while having lunch on board and enjoy the mighty bay view. Ha Long Bay meaning Descending Dragon Bay in Vietnamese as legend has it that it was where a holly dragon landed down from sky. The bay, famous as one of the world’s wonders and heritage sites whose formation dates back 500 million years, consists of around 2,000 karst islands and islets scattered over an area of 1,553 km2. The bay cruise will continue with up close sighting of Dinh Huong Island, Ga Choi Island, Dog Island, Sail Island, a visit to Sung Sot Cave and swimming stop at Titov Beach. Relax to enjoy the bay view at sunset, have dinner after, go fishing at 09:00 PM and spend a night on board

Note: cruise program can be changed following to your chosen cruise.

Early risers can enjoy the splendid yet tranquil view of the bay at the crack of dawn. Breathe the sea’s fresh air, feel the morning breeze and hear the sounds of birds above. Have breakfast and cruise to visit Human head shaped island and Tortoise Island. Continue to cruise into Bai Tu Long Bay to discover the adjacent bay of “The Little Dragon Bowing to His Mother” as it is named. Check out and heading to shore.

Transfer back to Hanoi and check in hotel for free at leisure.

Morning, transfer to airport for flight to Hue (an hour flight). Your flight should reach Hue at around 10:00 or a bit earlier. Hue, the former Imperial Capital of Vietnam for the 1802-1945, is the last refuge of Vietnamese feudalism. It is known as a city of poetic beauty that blends a scenic landscape characterized by the Perfume River and surrounding mountains with an extremely rich historical legacy typified by numerous relics such as citadel, tombs and pagodas.

Arrive in Hue after a one-hour flight, welcome by our guide and begin to sightsee the city. Begin with Hue Citadel, a well-known UNESCO-recognized World Heritage Site, which is a 520 ha fortress-like grand complex built in the early 1800s which features three enclosures separated by heavy ramparts namely Kinh Thanh Hue (Civic City) as the outer, Hoang Thanh (Royal City) as the middle and Tu Cam Thanh (Forbidden City) as the inner. Move on to Khai Dinh Tomb, the burial site of Khai Dinh, Vietnam’s second-to-last king, which is the most elaborate compared to other kings’ tombs. The tomb shows a vivid European influence in architecture despite its Asian style.

Check in your hotel to refresh and rest until mid-afternoon. Start sightseeing again with a boat cruise along the Perfume River for sightseeing and visiting two prominent historical landmarks namely Minh Mang Tomb, where Minh Mang, the 2nd Emperor of the Nguyen dynasty was buried, and Thien Mu Pagoda, a Buddhist monastery still in use with its origin dating back to 1601. Dinner at a royal style restaurant. Overnight in Hue.

Morning, transfer to Quang Binh province to visit its top natural icon, the Phong Nha - Ke Bang National Park. The park, recognized by UNESCO as a World Natural Heritage Site, ranges over an 85,754 ha area of a limestone zone characterized by primitive tropical forests, rock formations and complex cave systems connected by long underground rivers all aged around 400 million years. While the karst mountains here are Asia’s oldest, the local caves hold the world records as the largest and the longest and being among the best to explore. Ride a boat along a meandering and mountain-flanked river to Phong Nha Cave, the park’s second largest cave system that was discovered in 2009 by the British Caving Association. Enter the cave through its half submerged entrance and start to discover what is said to be speleologists’ heaven on earth. Back to hotel in Hue.

Morning, transfer to Hoi An via Hai Van Pass (Ocean Cloud Pass). Enjoy a stunning headland-and-bay panoramic view from the pass, which for miles hugs the mountainside along the shoreline and overlooking the Pacific Ocean. Stop en route in Da Nang City to visit the Museum of Cham Sculpture and Marble Mountains, whose peaks represent the five basic elements of the universe. Lunch at local or Indin restaurant en route before arriving in Hoi An. Once a bustling maritime commercial port of Asia between 15th and 19th centuries, Hoi An, recognized by UNESCO as a World Heritage Site, is now a peaceful town of exceptionally well-preserved architecture, lifestyles and traditions. The town exemplifies a fascinating fusion of cultures between Vietnam and the outside world including China, Japan, Thailand and the Philippines.

Afternoon, take a town tour of Hoi An to see its beauty up close. Included for your sightseeing will be the town’s iconic 400-year-old Covered Bridge with a small temple attached to one side as a prominent example of Japanese architecture, the Museum of Trade Ceramics which is an elegant Vietnamese style wooden house built in 1858 showcasing antique ceramic artifacts, the 200-year-old Tan Ky House typifying an ancient Chinese merchant residence, the Ong Temple built in 1653 by Chinese settlers to worship Guan Yu, an ancient Chinese general whose character stands for loyalty, bravery and justice. Enjoy strolling the small streets of antique low tile-roofed houses, which reflect the town’s multi-cultural past. Overnight in Hoi An.

Day 8
HOI AN – MY SON SANCTUARY

Morning, transfer about 40 km West of Hoi An to visit My Son Sanctuary, another UNESCO-recognized world heritage which was once a religious center of Cham people where royal ceremonies and burials were performed. The site now is a colony of partially ruined Hindu temples from the total of 70 constructed by Cham Kings between the 4th and the 14th Centuries in dedication to god Shiva. It is regarded one of the foremost Hindu temple complexes in Southeast Asia and is often compared with other temple heritages of Southeast Asia such as Angkor in Cambodia, Ayuthaya in Thailand or Borobudur in Java.

Afternoon, time at leisure for shopping in town. Overnight in Hoi An.

Free at leisure until transfer to airport for departure flight.