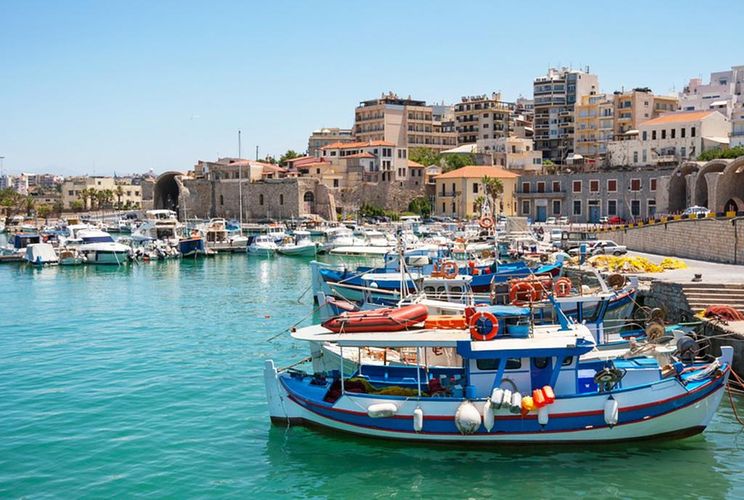 Mykonos: Mykonos is the party animal of the Cycladic islands, with bronzed bodies thronging its beaches by day and bass lines pounding through its super clubs until dawn. However, there is more to Mykonos than the dazzling sand, and insatiable revellers.Patmos: Patmos Island, which is also known as the “Island of the apocalypse”, has a strong spiritual character. According to the tradition, Saint John the Divine was inspired to write the Book of the Apocalypse inside a cave in Nisyros. There’s also a large monastery dedicated to Saint John above Chora, the island’s capital. Thousands of pilgrims come to Patmos Island every year to visit these two religious monuments.Santorini: Santorini is the supermodel of the Greek islands, a head-turner whose face is instantly recognizable around the world: multi-coloured cliffs soar out of a sea-drowned caldera, topped by drifts of whitewashed buildings. With its reputation for dazzling panoramas, romantic sunsets and volcanic-sand beaches, it’s hardly surprising the island features on so many travellers’ bucket lists.

Day 1
ARRIVAL ATHENS
Upon your arrival at Athens International Airport/ Piraeus port, meet our English-speaking tour assistant. They will take to your hotel in Athens in the comfort of an air-conditioned luxury vehicle. Your evening begins with a short panoramic drive through the city centre, and on the slopes of the sacred hill, you will be able to see, admire and take photos of the illuminated Acropolis. Then a pleasant walk through the narrow picturesque streets of Plaka, the old city, will bring you at a Typical Greek Tavern where you will enjoy your dinner following a floor show with live music and Greek Folk Dances in traditional costumes. Otherwise, enjoy the afternoon at leisure. Overnight in Athens.
Day 2
ATHENS – MYKONOS (6.5 hrs, by cruise)
Wake up to a luscious breakfast at your hotel (included) and get ready for your morning transfer at 8.30 am to the port of Piraues, where you embark on your cruise ship - Celestyal Olympia. At 11.30 am you will be leaving Port Piraeus and heading towards to a beautiful island Mykonos in the Cyclades. The island, according to Greek mythology, was formed by the bodies of giants slain by Hercules. The most recognizable site of Mykonos is the row of immaculate picture postcard white windmills overlooking the water. Every visitor takes that picture. The Old Town has many delightful cafes and taverns along its winding alleys and time will pass very quickly in these lovely, relaxing surroundings. You will be departing from Mykonos at 11.30 pm. Dinner is served on board (included). vernight on board of The Celestyal Olympia Cruise.
Day 3
MYKONOS – KUSADASI (8.5 hrs, by cruise) – PATMOS (4 hrs, by cruise)
Enjoy your tasty breakfast on board (included) and get ready for your following adventure. Vibrant and colourful, Kusadasi in Turkey is the gateway to the Hellenistic ruins of Ephesus, famed for the Temple of Artemis, one of the Seven Wonders of the Ancient World. Your cruise will arrive to Kusadasi at 7.30 am and you will have a whole morning for exploring this biblical port. Join our tour to Ancient Ephesus (included), which will introduce you to the secrets of the Temple of Artemis. The tour takes approx. 3 hours, during which you find Immortal relics of the Hellenistic, Roman and Early Christian era. At the archaeological site you will be given a guided tour among the Agora, the Odeon, the Library of Celsus, the marble-paved main Street of Kouretes, the Baths of Scholastica, Trajan’s Fountain, the Public Latrines, the Residences of the Patricians, the Prytaneum and the Temple of Hadrian. At 1.00 pm you will be departing from Kusadasi, and you will continue to Patmos, a small, charming island which lies in the Dodecanese. Biblical legend has it as the supposed location of the vision to John the Baptist in the Book of Revelations and the inspiration this book. You will arrive to Patmos at 5.00 pm and you will have 4 hours for discovering this sacred island. Perhaps the visit of the monastery of St. John could be a good idea to get an insight into the island´s legends. At 9.30 pm the cruise will be leaving this sacred island and will head toward the following destination, Rhodes. Dinner is served on board (included). Overnight on board of The Celestyal Olympia Cruise.
Day 4
PATMOS – HERAKLION (8 hrs, by cruise) – SANTORINI (4.5 hrs, by cruise)
After a delightful breakfast on board (included), you will be arriving to the largest island of Greece, Crete. At 7.00 am you will disembark in Heraklion, a vibrant small metropolis, which hide mythological stories and legends of the ancient world. It is Crete's biggest city (among Chania, Rethimno, Agios Nikolaos, Sitia, Ierapetra), whose emblem is the Venetian fortress of Koules and it harmoniously combines a multilingual past as Byzantine churches standing next to the Venetian mansions and Turkish fountains and a thriving present with many restaurants, coffee shops and bars that cater to every taste. Enjoy the visit of the Palace of Knossos, once the home of Europe’s oldest civilization and the setting for the legend of Greek hero Theseus and the Minotaur (included). You will be departing from Heraklion at 12.00 noon, heading to another beautiful island, Santorini, whose stunning face is instantly recognizable across the world. We’re sure it takes your breath away, with its soaring landscapes, clusters of whitewashed houses in the capital Fira, and of course the iconic blue-domed church at Oia. Don’t forget to try one of the many restaurants jostling for position at the edge of the caldera. After the arrival to Santorini at 4.30 pm you will have a whole afternoon (until 9.30 pm) to enjoy its natural gems and cultural heritage. Dinner will be served on board (included). Overnight on board of The Celestyal Olympia Cruise.
Day 5
DEPARTURE ATHENS
Begin your last day with a tasty breakfast on board (included) and enjoy the last chilled moments on the cruise, before you reach Athens at around 7.00 am. We hope this voyage was a real “wonder” for you. At approx. 8.00 am, there will be a driver waiting for you to take you by the shared transfer from the port to the Athens airport/ Piraeus port where you will catch your onward flight/ ferry to your following destination.