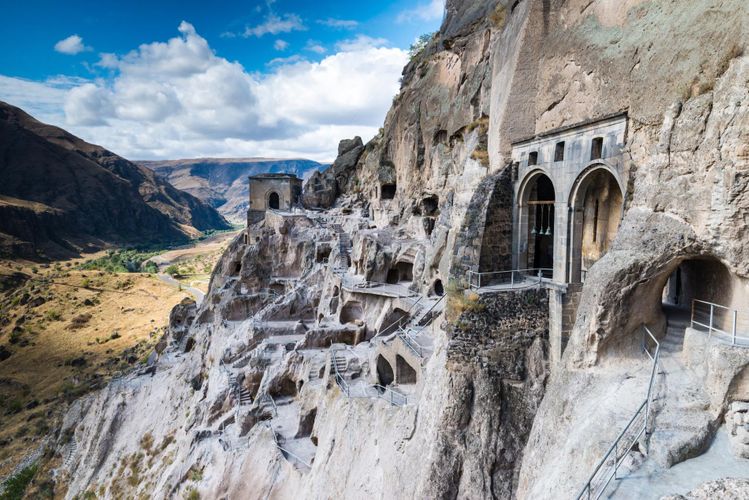 Day 1
Arrival at Tbilisi
Airport pick up and transfer to the hotel.
Day 2
City Tbilisi Tour And Mtskheta
City Tbilisi tour on Double Decker BUS and tour to Mtskheta – old capital of Georgia The capital of Georgia – Tbilisi, is the ancient multicultural city. Here you will be captivated by a thrilling blend of eastern enigma and western elegance. The traditions of the East and West meet here to form a culture unlike any other in the world. During the tour we take you to the places that will show you old city.You can take a glance to the history of the city from early centuries to nowadays by walking in narrow streets of the city and exploring the religious and secular architecture. Here you find different religious buildings– churches, synagogues, mosques, as well as famous 19th century houses with wooden multi-colored balconies. You will have the opportunity to discover the best of Tbilisi Sightseeing from high above the city streets with the red double-decker bus tour.During the tour you will discover the best of Tbilisi city sightseeing , such as :Meidan square ,Sulphur bath district , Mtkvari River ,Rike Park,Peace bridge ,Freedom square,Rustaveli avenue ,Dry bridge ,Agmashenebeli Avenue and much more ! After City Tbilisi tour ,we will go to visit old capital of Goegia-city Mtskheta . Mtskheta day trip offers you to escape the city and visit the oldest city of Georgia within just few hours. During the tour, you can enjoy panoramic aerial views of mountains around Jvari Monastery, observe the confluence of Aragvi and Mtkvari rivers, or have a time trip back to early centuries in the area of Svetitskhoveli cathedral and Samtavro church, at the end of the tour you will taste Georgian wine.
Day 3
Kakheti
Day tour to Kakheti region. Our Kakheti tour offers a day in one of the most beautiful regions in Georgia. The very best wines come from Kakheti. Almost three-quarters of the county"s wine grapes are grown here. Archaological findings have suggested that wine has been produced here for several thousand years. Almost every village in Kaketi is well known for its own sort of wine, such as Kindzmarauli, Akhasheni, Teliani, Mukuzani. Wines are named after the places where they are produced. Trip to Kakheti includes several tourist destination, such as Monastery of St. Nino in Bodbe, Sighnaghi – City of Love. On our way we will taste georgian bread called puri. Puri is traditionally baked in a deep circular clay oven called tone. During the harvest season, we will also visit one of the biggest wine factories in Khakheti, where you can taste and buy wine.
Day 4
Stephantsminda(Kazbegi) Mountain
Day tour to Ananuri-Gudauri-Kazbegi mountains . On our tour to Ananuri-Kazbegi mountains you will have an exciting drive, heading north along the Georgian Military Highway into the high Caucasus Mountains. This is the main road running for 220 km from Tbilisi to Vladikavkaz in Russia, a spectacular highway that winds its way through sheer mountains. This route actually dates back to 1st century BC and is still important as the only link connecting to Russia through Caucasus Mountains. Trip to Ananuri-Kazbegi includes several touristic areas, such as Ananuri architectural complex and Zhinvali water reservoir and Kazbegi village.
Day 5
Vardzia Cave
Day tour to Vardzia cave town , Rabati castle and Borjomi National Park. Vardzia is a cave site in southern Georgia dating back to 12th century, excavated from the slopes of the Erusheti Mountain on the left bank of the Mtkvari River. Excavations have shown that the area of Vardzia was inhabited even earlier during the Bronze Age. There you can find bell tower, main church, cave dwellings, rooms, chapels, pharmacy and wine cellars. Beyond the bell tower the complex rises to nineteen tiers, with steps leading to a cemetery. Infrastructure includes access tunnels, water facilities, and provision for defence. Vardzia has been submitted for future inscription on the UNESCO World Heritage List as a Cultural Site. Rabati Castle is a medi castle complex of Asian style in Akhaltsikhe. Built in the 13th century, Rabati castle developed under the influence of different cultures over subsequent centuries and this is reflected in its architecture. Within the 7 hectares castle complex there is a Church, a Mosque, a Minaret and a Synagogue. Borjomi is the picturesque resort town in south-central Georgia located on the edge of the Borjomi-Kharagauli National Park. The town is famous for its mineral water, which is the number one export of Georgia; the Romanov summer palace and the World Wide Fund for nature-site Borjomi-Kharagauli National Park. Borjomi is also home to the most extensive ecologically themed amusement park in the Caucasus.
Day 6
Free day
Free day for souvenirs
Day 7
Departure
Transfer to Tbilisi Airport.