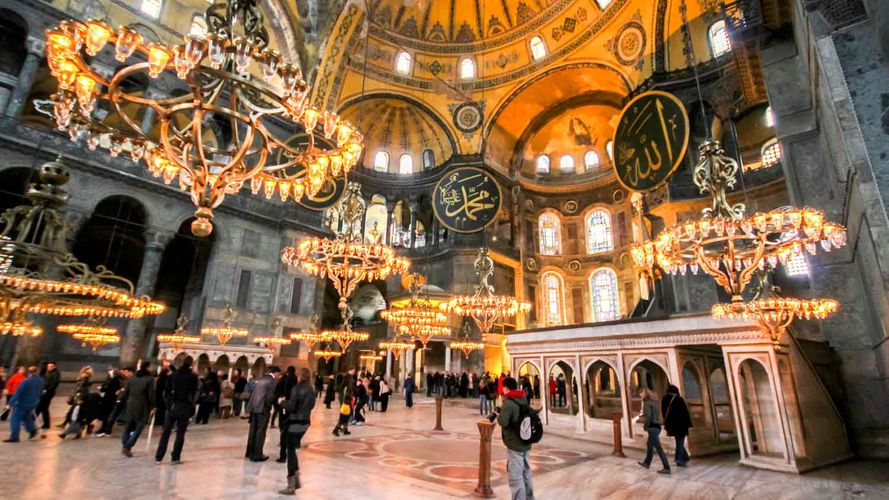 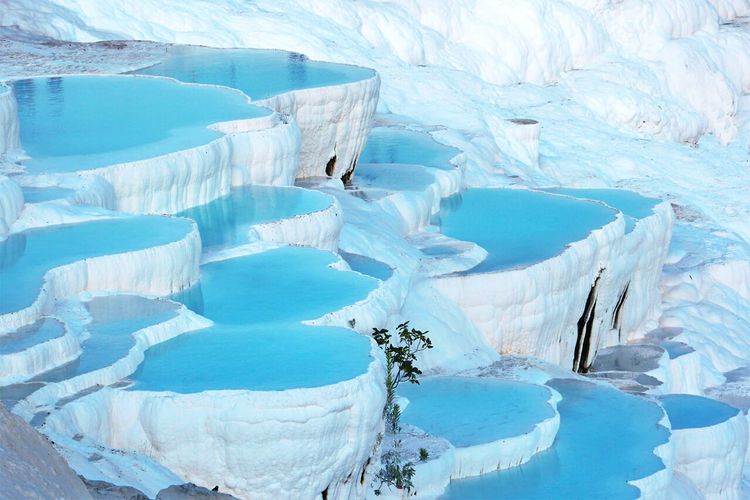 See historical highlights in Istanbul, explore the famous Gallipoli battlegrounds, visit ancient cities, and enjoy a delightful encounter with the famous Pamukkale natural phenomenon on this memorable seven-day tour of some of Turkey's most impressive sights. Stroll the beautifully arranged streets of Istanbul and visit the fascinating Topkapi Palace, used by the Ottoman Sultans, admire the famous Blue Mosque, a unique piece of architecture built for Sultan Ahmet I, and catch a glimpse of the magnificent ancient Hippodrome. Then, continue to Gallipoli to get closer to history and dig deep in mythology while visiting Troy. Enjoy this comprehensive tour around the important historical sites of western Turkey giving an insight into the country’s fascinating history. Istanbul: Served as a capital city to the Byzantine and Ottoman Empires, this Euro-Asian city never fails to enthral, with its beautiful buildings in the old city of Sultanahmet overlooking the Bosphorus strait which separates the city between Europe and Asia. You can find anything you might be looking for and more in Istanbul. Canakkale: An important town and seaport of the country, it is also a significant historical site, hosting the WW1 battlefields at Gallipoli. Pamukkale: Visit one of Turkey’s top attractions and catch a glimpse of the white travertines formed by calcified minerals running down a hillside. Hierapolis: Stroll the beautiful alleys of an ancient Greek holy city boasting a well-preserved Roman theatre with a wealth of classical monuments.

Day 1
ARRIVAL ISTANBUL
Arrive at Istanbul airport, meet our representative and enjoy a comfortable transfer to your hotel. You will be given your room key and the rest of the day is yours to wander around the beautifully arranged streets of Istanbul. Overnight in Istanbul.
Day 2
ISTANBUL
Delight in a tasty breakfast before you are picked up from the hotel to begin a tour of the old city of Sultanahmet. The first stop is Topkapi Palace, the great palace of the Ottoman sultans from the 15th to the 19th centuries housing an exquisite collection of crystal, silver, and Chinese porcelain, robes worn by the sultans and their families, the famous jewels of the Imperial Treasury, and much more. Next stop is the fascinating Sultanahmet Imperial Mosque- across from St. Sophia built in the 16th century by the architect Mehmet, also known as the Blue Mosque because of its’ magnificent interior decoration of blue Iznik tiles. Then, admire the imposing ancient Hippodrome and the three monuments: the Obelisk of Theodosius, the bronze Serpentine Column, and the Column of Constantine. After a delicious lunch, we will then take you to the Grand Covered Bazaar. In this labyrinth of streets and passages there are more than 4,000 shops with each trade having its own area: the goldsmiths street, the carpet sellers, and Turkish arts and crafts, to name a few. After the tour, enjoy your transfer back to the selected hotel. Overnight in Istanbul. Lunch included.
Day 3
ISTANBUL – GALLIPOLI– CANAKKALE (265 KM – 4 HRS)
After a delicious breakfast, we depart for Gallipoli to visit the WW1 battlefields. On arrival, we indulge in a tasty lunch, relax a little bit, and then depart for the battlefields. The nine-month campaign began in 1915 and was fought between the British Empire and the French against the Ottoman Empire for control of the Dardanelles Strait. First, we visit Gabatepe Museum and see artefacts from the terrible battles fought on this land during WW1. We then move on to the actual battlefields visiting Ariburnu Cemetery and Anzac Cove where the war battle started. Then, we catch a glimpse of the Beach Cemetery, Shrapnel Valley, and Plugges Plateau. After the tour, we travel a short distance to Canakkale, a seaport on the Dardanelles. Overnight in Canakkale.
Day 4
CANAKKALE –TROY - PERGAMON – KUSADASI (430 km – 6 Hrs)
After enjoying a tasty breakfast, we drive to the site of Troy and visit the famous archaeological and mythological site, home of the Trojan Horse and the legend of Helen of Troy. Afterwards, we set off on a three-hour drive to Pergamum, a rich and powerful city during ancient Greek times. After a delicious lunch in Pergamon, we begin the tour with the magnificent acropolis of Pergamum. Its impressive temples and library made it a renowned cultural and political centre at the time. The city was also famous for its jewellery, precious stones, and silver, so you will also enjoy a short visit to a local jewellery centre. The tour continues to the coastal resort of Kusadasi on Turkey’s Aegean coast. Overnight in Kusadasi. Lunch included
Day 5
KUSADASI – EPHESUS - KUSADASI (40 km – 30 mins)
Enjoy your breakfast at the hotel and depart for a fully guided tour of Ephesus, one of the best preserved ancient sites in the world. This once thriving metropolis gives a real feel of how the city once looked, as you walk down marble-paved streets and admire the remains of the Celsus Library, Hadrian’s Temple and the amphitheatre. We then move on to Meryamana or House of the Virgin Mary which is in a hilltop location a short distance from Ephesus. According to the stories, Mary spent her last years here and was sanctified by the Roman Catholic Church. Indulge in a delicious lunch and then visit a carpet weaving centre to watch the ancient practice of carpet-weaving. Afterwards, explore Sirince, a pretty village which sits high up in the hills behind Selcuk and was once inhabited by Anatolian Greeks. The narrow, cobbled streets are packed with stalls selling local products such as homemade jams, souvenirs, wine, and textiles. Famous for its fruit wines, we will visit the vineyards and learn how to make fruit wine with the local winemakers. Before returning to Kusadasi, the final stop is at a leather production centre where you will have the opportunity to get good factory rates. In the evening completely unwind while enjoying an optional Turkish bath. Overnight in Kusadasi. Lunch included.
Day 6
KUSADASI – PAMUKKALE (190 km – 3 Hrs)
After a tasty breakfast, we depart for Pamukkale. On arrival around, check into the hotel and relax while enjoying a luscious lunch. Afterwards, visit the spellbinding calcium terraces of Pamukkale and walk around this natural phenomenon which has been formed by calcium deposits in the water trickling down the hillside and solidifying into white travertines. Then, wander around the charming ancient city of Hierapolis which sits above the travertines. The beautiful city was popular among the Romans for the healing powers of its natural spring water. And if you feel adventurous choose one of the optional activities available. You can enjoy a memorable hot-air balloon ride or have fun paragliding in Pamukkale. Overnight in Pamukkale. Lunch included.
Day 7
DEPART PAMUKKALE
Start your last day of the tour with a tasty breakfast. Then, check out of the hotel and enjoy your transfer to Denizli Airport to continue your travel arrangements. Breakfast included 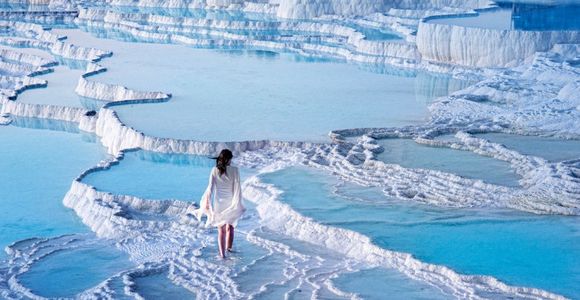 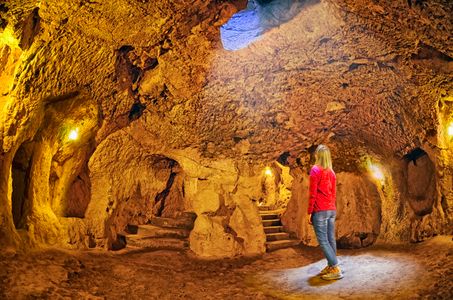 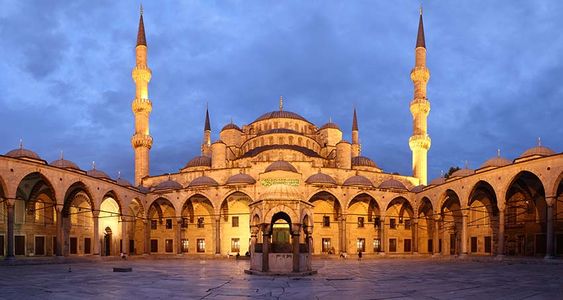