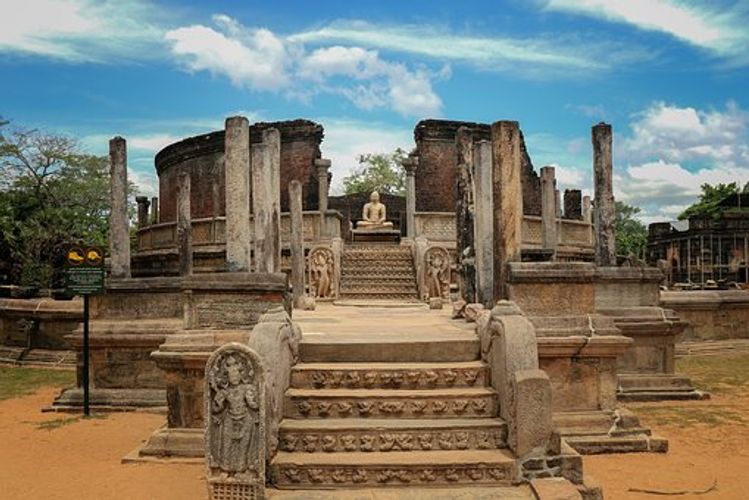 Hotel Accommodation Meals Air Tickets (International / Domestic) Visa and Insurance Suggested optional activities/ tours if any. Any meals / snacks other than mentioned in the itinerary Camera Fee and any other entertainment charges Tips of any kind – Guides, Driver, Cruise Crew, etc. Portages at airport Personal Expenses such as Laundry, Telephone etc Beverages of any kind Any Item do not mentioned above

Day 1
Arrival and Sightseeing
We start off by heading to the 1st century BC built Dambulla Cave Temple. It is the biggest and best-kept cave temple throughout Sri Lanka. Spanning murals across 2,100m and housing over a hundred statues, you’ll have plenty to feast your eyes on. Next we’ll pop for some lunch before we roam around the Ancient city of Polonnaruwa which has been declared a World Heritage Site. As well as its rich history which you’ll find out all about, it’s in the middle of a major revamp which aims to improve the standard of living for the locals so you’ll be able to see how the old and new parts of the city are being meshed together. After a fun-filled day, it’s time to go back and put your feet up at your chosen hotel in either Sigiriya, Dambulla or Habarana for a bite to eat and a good night’s rest.
Day 2
Sigiriya later to Kandy
Rise and shine on the second day, meander around Sigiriya Rock Fortress which was built way back in 477-495 AD by King Kashyapa. This is very important to the beginnings of Buddhism but it is of perhaps even greater significance to the history of mankind. We then make our way to Kandy and we visit an authentic spice garden en route. We shall have a spot of lunch before we tour the city which is in the thick of the Kandy plateau which means that the city is tropical plantation and hills galore. As the day draws to an end, you’ll get to see a cultural show and take a trip to the Temple of the Tooth Relic. The Buddhist temple is for the most part the reason for the city being granted its status as a World Heritage site. Asides from the religious element, the relic is regarded as sacred in terms of politics as well. After another action-packed day, it’s time to head to the hotel in Kandy for some grub and once that’s settled, it’s off to hit the hay.
Day 3
Pinnawala Elephant Orphanage, Later proceed to Onward
First things first we go along to a beautiful botanical garden which is bursting with tropical plants and flowers which certainly lift your senses. We then move on to an art and crafts centre for those of you who like to dabble around with their creative side. There’s an optional visit to a gorgeous gem museum where you can ooh and ahh at all the sparkly and shiny, pretty little things. It would be nigh on impossible to go to Sri Lanka without acknowledging the enormous tea industry. You will visit a tea factory in Giragama and you will see the whole process from start to finish unfold before your eyes. Take a special trip to meet some enormous and yet all the while endearing elephants at the Pinnawala Elephant Orphanage which was founded in order to rescue abandoned baby elephants. We make a stop for some lunch in Pinnawela before we round things off.