Day 1
ATHENS/CAPE SOUNIO (140km – 4 hrs)
On your arrival at Athens airport, a representative will greet you and transfer you to the selected hotel in Athens, in a comfortable air-conditioned car. Athens has an array of amazing hotels, and this package has the cream of the crop. In the afternoon drive along the coastal road, passing the wonderful beaches of Glyfada, Vouliagmeni, and Varkiza to the most Southern point of Attica, Cape Sounio, where the white marble pillars of the Temple of Poseidon stand. On the way, you have a splendid view of the Saronic Gulf and the little islands offshore. After visiting the Temple of Poseidon, you have time to walk at leisure on the rocky promontory of Sounio, before returning to your hotel. In the evening you have the opportunity to book an optional Night out in Athens tour. Your evening begins with a short panoramic drive through the city centre, and on the slopes of the sacred hill, you will be able to see, admire and take photos of the illuminated Acropolis. Then a pleasant walk through the narrow picturesque streets of Plaka, the old city, will bring you at a Typical Greek Tavern where you will enjoy your dinner following a floor show with live music and Greek Folk Dances in traditional costumes.
Day 2
ATHENS – CANAL OF CORINTH – EPIDAURUS –NAUPLION - MYCENAE – OLYMPIA (385km – 9 hrs)
Indulge in a delicious breakfast at the hotel before taking the coastal road to the Corinth Canal. Stop for a few moments and drive towards the Theatre of Epidauros, famous for its remarkable acoustics. Afterwards, proceed to the town of Nauplion and stop to take some stunning photos. Continue driving towards Mycenae to visit the Archaeological Site and the Tomb of Agamemnon. Then depart for Olympia through Central Peloponnese and the towns of Tripolis and Megalopolis. Overnight in Olympia, the cradle of the Olympic Games. Overnight in Olympia.
Day 3
OLYMPIA - DELPHI (330km – 9 hrs)
Begin your day with a mouthwatering breakfast at the hotel. Afterwards visit the Archaeological Site with the Sanctuary of Olympian Zeus, the Ancient Stadium, and the Archaeological Museum. Then drive on through the plains of Eliad and Achaia until the magnificent bridge that crosses the Corinthian Bay from Rion to Antirion. Pass by the picturesque towns of Nafpactos (Lepanto) and Itea, and arrive in Delphi where a comfortable hotel room and a delicious dinner are waiting for you.
Day 4
DELPHI - ATHENS (330km – 9 hrs)
Have breakfast at the hotel and, early in the morning visit the Archaeological Site and the Museum. Enjoy a few hours of free time in Delphi before departing towards the village of Arachova, renowned for its colourful rugs and carpets. Return to Athens via Levadia and Thebes, arriving early in the evening. And in case you missed this on your first day, you have again the chance to enjoy an optional night out in Athens. 2020 Accommodation: Overnight in Athens.
Day 5
DEPART ATHENS (50km – 4.5 hrs)
After breakfast and check out, leave your luggage at the reception and begin a memorable tour exploring the striking contrasts that make Athens such a fascinating city. Our expert guides will take you to see the Panathenaic Stadium where the first Olympic Games of modern times were held in 1896. Continue strolling and pass by the Prime Minister's residence-the ex Royal Palace, guarded by the Euzones in their colourful uniform, see the Temple of Olympian Zeus, the Hadrian's Arch, the Parliament and the memorial to the Unknown Soldier, the Academy, the University, the National Library, the Constitution Square (Syntagma). On the Acropolis, visit the Architectural Masterpieces of the Golden Age of Athens: The Propylaea, the Temple of Athena Nike, the Erechtheion and finally "the harmony between material and spirit", the monument that "puts an order in the mind", the Parthenon. Afterwards, admire the wonders of the classical era at The New Acropolis Museum. In the afternoon transfer to Athens airport and continue with your travelling arrangements. Breakfast included. 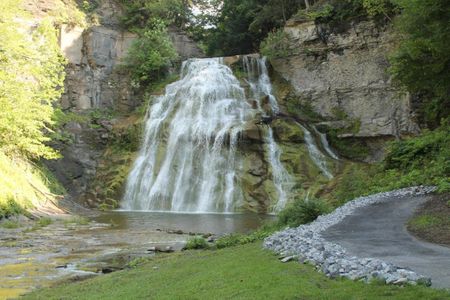