Madrid, the capital of Spain and located in the centre of the country, is a cosmopolitan city that offers countless places to visit and enjoy. Discover its numerous gastronomic markets, gardens, palaces, squares, museums and theatres on this three-day tour. Then explore Toledo, a UNESCO-listed World Heritage Site and the historical home of Jews, Christians and Muslims who all coexisted here in mediaeval times. Highlights Madrid: Discover this cultural city through its many interesting sites, including the Paseo de la Castellana; the Cibeles Fountain; El Retiro Park, the largest green space in the city; the Puerta del Sol; the Art Walk (which includes El Prado, Reina Sofía and the Thyssen Museums); the Puerta de Alcalá; the Royal Palace; and many more. Toledo: The spirit of El Greco lives on in the ancient streets of this beautiful city. Visit its cathedral, historical churches and mediaeval synagogue.

Day 1
Arrival Madrid
Upon landing at Madrid’s airport, head to the Arrivals hall where you will find a driver holding a sign with your name on it. You will then be accompanied to the transfer to your hotel, where you can settle in before spending the rest of this first day at your leisure. Perhaps hit the streets and start exploring the many things one can do in this vibrant city, from visiting museums to enjoying a drink and tapas in one of its innumerable bars. Alternately, you can kick back and make the most of the available services at the hotel. In the evening, you can ask your hotel reception for restaurant recommendations to discover Madrid’s highly-renowned gastronomy before spending the first night in the hotel. Overnight in Madrid
Day 2
Madrid
Wake up to breakfast at the hotel before heading out to start your tour of Madrid. The coach will leave at 9:00 on Calle San Nicolás, 15, next to Plaza Los Ramales. You will first be taken to see the Plaza de Oriente and the Debod Temple, where we will stop to enjoy a walk and take some pictures. After this visit, return to the coach and head to the Plaza Mayor for a second stop to visit the Plaza de Villa and the iconic Puerta del Sol. The coach then continues on the rest of the tour, driving by Carrera de San Jerónimo Street, Las Cortes (the Spanish Parliament), Neptuno’s Square (a famous artistic fountain), the Paseo Del Prado (an avenue containing the Thyssen, Prado and Reina Sofía Museums), the Atocha Railway Station, the Royal Botanic Gardens, Cibeles Square (which has another renowned fountain), Alcalá Street, Alcalá’s Gate, the Las Ventas Bullring, the Santiago Bernabéu Stadium (Home of the Real Madrid CF), Paseo de la Castellana Street, Columbus Square, the National Library, Gran Vía, Plaza de España and, lastly, Plaza de Oriente, where the tour comes to an end. Weather permitting, and always alongside your guide, the bus will make three stops throughout the trip: the aforementioned stops at the Plaza Mayor and the Debod Temple, as well as a third one at the Las Ventas Bullring. After the tour, the rest of the day is free for you to spend at leisure and make your way back to the hotel at whichever time suits you best. Overnight in Madrid
Day 3
Madrid - Toledo - Madrid (70kms - 1hr)
After breakfast at the hotel, go back to the meeting point at Calle San Nicolás, 15, next to Plaza Los Ramales to begin your half-day tour of Toledo at 8:45 (from April to October it starts again at 15:00. Located 70 km from Madrid, this beautiful city-museum was declared a World Heritage Site by UNESCO. It is one of the oldest towns in Europe and it contains a wealth of artistic beauty, as well as buildings boasting styles from almost every period in Spanish history (Arabian, Gothic, Mudéjar, Renaissance and Baroque). Toledo is known as the ‘City of the Three Cultures’ since Christians, Muslims and Jews coexisted between its walls in mediaeval times. In the 16th century, it was also home to the great painter El Greco. During this walking tour you will get to see the outside of the Cathedral. Then visit the Church of Saint Tomé, which contains El Greco’s masterpiece: ‘The Burial of the Lord of Orgaz’. Later in the day, walk into the ancient synagogue of Santa María la Blanca, and after that, visit the interior of the amazing monastery of San Juan de los Reyes. Afterwards you will have the chance to see a demonstration of damascening, an ancient technique and art that consists in inlaying precious metals in steel, traditionally for forging swords. At the end of the tour, you’ll be dropped off at the Julia Travel Office, from where you get to spend the rest of the day at leisure. Overnight in Madrid
Day 4
Departure Madrid
After a leisurely breakfast at the hotel, enjoy one last day in this magnificent city by going on a shopping spree or simply by strolling through its unforgettable history-filled streets. Then, at the indicated time, bid farewell to the city and catch your transfer to the airport or train station to continue to your following destination. Breakfast included 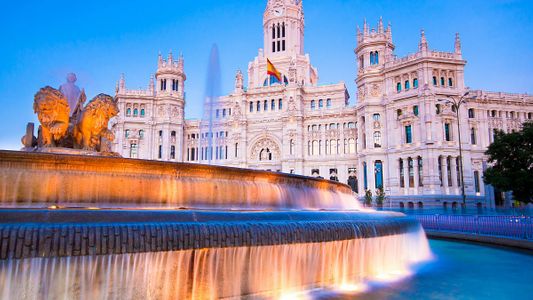