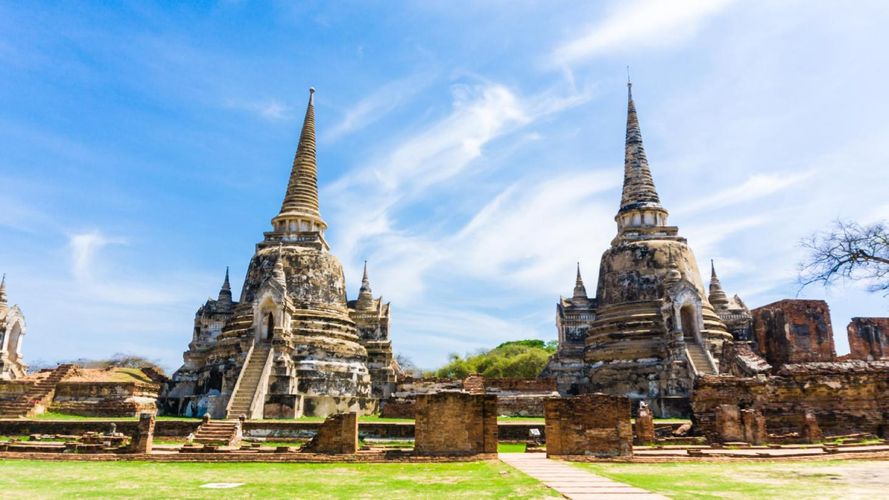 Modern Thailand merges into historic Siam over five unforgettable days with this round-trip starting and ending in Bangkok. Discover the ancient monuments, dazzling temples and bustling markets that help make Thailand the most captivating country in Southeast Asia. Visit ruins such as those of Ayutthaya and Sukhothai, which offer an insight into the grandeur of past glories, and meet the inhabitants of remote rainforest villages, where the past is very much alive. Join us for a magical journey to uncover Siam’s glittering gems. Highlights - Bangkok: Enjoy the sweet smells of fresh flowers at Bangkok’s largest flower market, Pak Khlong Talat - Ayutthaya: Ancient capital of Siam and the location of a haunting UNESCO World Heritage Site - Lampang: See three countries from one spot in Sop Ruak at the confluence of the Ruak and the Mekong rivers - Chiang Mai: Admire the views from the hilltop Wat Doi Suthep temple and explore the shopper’s paradise of San Kamphaeng Road - Lamphun: Visit the thousand-year-old Wat Phra That Hariphunchai, one of the holiest temples in the north - Sukhothai: A historic former capital with well-preserved ruins of temples and palaces - Lopburi: Explore two historic temples in this earthy city with troops of macaque monkeys roaming the streets

Thai Elephant Conservation Centre Air Tickets (International / Domestic) Visa and Insurance Hotel Taxes Suggested optional activities/ tours if any. Any meals / snacks other than mentioned in the itinerary Camera Fee and any other entertainment charges Tips of any kind – Guides, Driver, Cruise Crew, etc. Portages at airport Personal Expenses such as Laundry, Telephone etc Beverages of any kind

Day 1
ARRIVAL – BANGKOK
Arrive at the Bangkok International Airport, you will be met by a representative of Destination Services, meet and greet and transfer to your hotel (transfer unescorted). Enjoy the rest of the day at leisure. Perhaps indulge yourself with a traditional Thai massage, delight your taste buds with the amazing local flavours and cap off the day by enjoying the sunset at any of the stylish rooftop bars which have blossomed in the city’s skyscrapers in recent years - the options are limitless. Overnight in hotel in Bangkok on selected board basis.
Day 2
BANGKOK
Full day at leisure to discover Bangkok on your own or to take one of the many optional excursions available on the spot. For those who have never been to Bangkok we suggest a half day tour of the most popular Buddhist temple and Landmark in the city of angels (optional, not included). The Royal Grand Palace, a great architectural masterpiece of several buildings from the outside and a magical inside was used as a royal residence from the 18th century to the mid-20th century. It is without any doubt a national reference and possibly the most visited royal monument of Thailand, and it shouldn’t be missed. The building houses the "Wat Phra Kaew", Bangkok's most sacred temple, in which is located the famous Emerald Buddha. Overnight in hotel in Bangkok. Breakfast included.
Day 3
BANGKOK – AYUTTHAYA – KAMPHAENG PHET (380km – 5hrs)
Pick-up at your hotel. Head to the former capital of Ayutthaya and contemplate ruins of this once-vast island city, which was mostly destroyed by an invading army 250 years ago. Today, the haunting ruins hint at its former glories as can be seen in temples such as Wat Yai Chaimongkhon, Wat Phanan Choeng and Wat Mahathat – where the roots of trees have devoured the head of a Buddha. Hop aboard a traditional long-tail boat and enjoy a scenic cruise around the island, observing the city’s ruins from a different perspective. After lunch at a local restaurant, continue to Kamphaeng Phet and check in at the hotel. Overnight in hotel in Kamphaeng Phet on selected board basis.
Day 4
KAMPHAENG PHET – LAMPANG – CHIANG MAI (350km – 5hrs)
Take to the road after breakfast at the hotel, heading towards Lampang. On arrival, visit Wat Phra That Lampang Luang. This large Lanna-style temple is prominently located on a hill surrounded by walls. Climb the naga staircase and explore the complex, which boasts seven buildings and a sacred tree. Admire the bronze Buddha statue in the ordination hall and the relic of Buddha in the golden chedi. Enjoy lunch in a local restaurant before continuing to Chiang Mai, popularly known as the ‘Rose of the North’. Check-in on arrival with the rest of the day at leisure. Maybe explore the city at your own pace or enjoy a relaxing Thai massage (not included). In the evening, head to the bustling night bazaar for a stroll or enjoy an evening out by trying a khantoke dinner, a traditional northern Thai feast combined with a selection of traditional cultural performances (optional, not included). Overnight in hotel in Chiang Mai on selected board basis
Day 5
CHIANG MAI
After breakfast in the hotel, visit Wat Phra That Doi Suthep, one of the most revered temples in the country. This sacred location is at the top of a mountain from where you can appreciate stunning panoramic views over the city. To reach the temple requires a climb up a 309-step naga staircase. Alternatively, you can use the cable car (included) to reach the temple. This spiritual sojourn is followed by a visit to the shopping heaven that is the famous San Kamphaeng Road, a 10km-long stretch of road flanked by shops selling locally produced goods such as pottery, silverware, lacquerware, handmade saa paper, sculptures, jewellery, wood carvings and silk products. In some shops, you can even watch the artisans at work. Keep an eye out for the celadon pottery and the silver goods, which are both usually of excellent quality. After local lunch in a local restaurant, return to the hotel with the afternoon free at leisure. Overnight in hotel in Chiang Mai on selected board basis
Day 6
CHIANG MAI – LAMPHUN – SUKHOTHAI (370km – 5hrs)
Bid farewell to Chiang Mai after breakfast at the hotel, heading to Lamphun, which is home to one of the north’s most important temples, the one-thousand-year-old Wat Phra That Hariphunchai. Visit the temple and admire the Buddha statues and impressive stupas, which include a 46-metre-tall Lanna-style golden chedi and 21-metre-tall Haripunchai-style chedi. Take to the road again and head south to Sukhothai Historical Park, which covers the ruins of the first capital of Siam. Founded in the 13th century, Sukhothai means ‘Dawn of Happiness’ and it proved to herald the beginning of a golden age for Thai culture under the rule of King Ramkhamhaeng the Great, who is credited with creating the Thai alphabet. The historical park has the ruins of almost 200 buildings, including dozens of temples. The complex, which is a UNESCO World Heritage Site, is divided between the ruins within the walls and moat and those outside them. Overnight in hotel in Sukhothai on selected board basis.
Day 7
SUKHOTHAI – LOPBURI – BANGKOK (480km – 7 hrs)
Depart Sukhothai after breakfast at the hotel, heading for Lopburi. This historic city is famed for the troops of macaques that roam the streets as if it were the jungle. Visit the ruins of the ancient Khmer temple of Phra Prang Sam Yot and the adjacent Brahman shrine of San Phra Kan, which is known as the ‘Monkey Temple’. Lunch is in a local restaurant en route. Continue to Bangkok. Overnight in hotel in Bangkok on selected board basis
Day 8
BANGKOK
Breakfast at the hotel, then leisure time before your transfer to the airport (transfer unescorted). Breakfast included. bangkok to the north