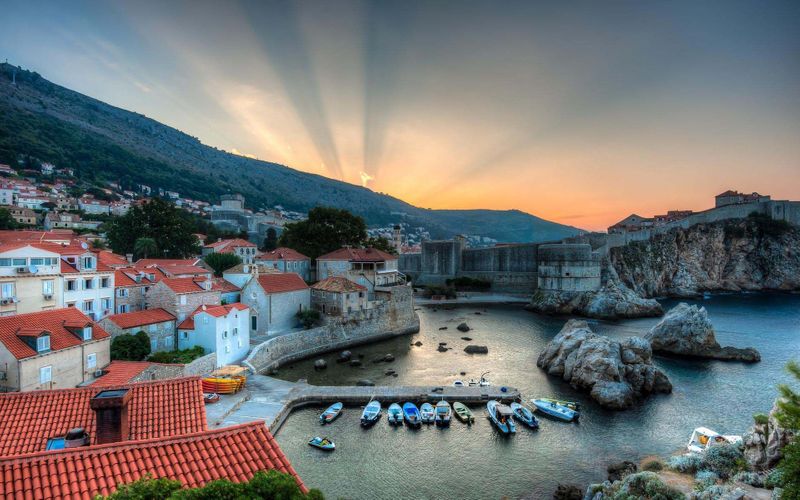 Day 1
Tirana
Arrive in Tirana and transfer to your hotel. Depending on when you arrive there may be time to explore the city. Overnight in Tirana.
Day 2
Tirana - Kruja – Shkoder
Start the day exploring Albania’s capital. We visit Skanderbeg Square, dedicated to Albania’s national hero, the Mosque of Ethem Bey, one of the oldest buildings in Tirana, and the Archaeological Museum among other sites. We then head to Kruja, one of Albania’s most important towns due to the part it played in resistance against the Ottomans. Visit the Skanderbeg Museum and castle as well as the old bazaar. Today lunch will be included and the opportunity to eat some traditional food in Kruja. Then continue to Shkoder. Shkoder is one of the oldest cities in the Balkans and was once a capital of the Illyrian state. It also considered the “Florece of the Balkans” due to its cultural inheritance and richness. We visit its old bazaar, cathedral and mosque before heading to Rozafa castle for spectacular views of the city, lake and the surrounding mountains. Overnight in Shkoder.
Day 3
Budva - Kotor
Sightseeing of Budva city. Then, we continue to Kotor. Visit the former palace of King Nikola, now Montenegro’s National Museum before heading to Kotor, whose lovely mediaeval walled city has been recognized as a world heritage site by UNESCO. After Kotor, we continue to Dubrovnik. City tour: visit the Old Town through the Stradun which is the main street of the city, in front of it is the Onofrio Fountain, built in 1438, the Franciscan Monastery, with one of the oldest functioning pharmacies in Europe, in operation since 1391. Overnight in Kotor.
Day 4
Dubrovnik
This morning we take a cruise around some of the islands in Kotor bay. Later we head to Dubrovnik, one of the most attractive cities in the region, where we have time to explore. Overnight in Dubrovnik.
Day 5
Pocitelj – Mostar
Cross the border to Bosnia-Herzegovina and visit the village of Pocitelj, an old Turkish settlement with many interesting monuments - damaged during the war but rapidly being restored to its former splendour. We then travel to Mostar, where we explore on a walking tour through the old Turkish town. Overnight in Mostar.
Day 6
Sarajevo
Head back to the capital, arriving around lunchtime. The afternoon is free to wander the streets of Sarajevo and take in anything that you’ve not yet seen. Overnight in Sarajevo.
Day 7
Sarajevo
This morning we take a tour through the old oriental part of Bosnia and Herzegovina’s capital city, with its beautiful architecture, sweet shops and cafes. We also visit the Princip Bridge, site of the start of World War I, and spot various markings on the pavements which are ‘mini-memorials’ to the sniper victims of the recent war. We also visit the tunnel museum, a section of the tunnel that was the only way of accessing the city during the siege of 1992-1995. Later there is free time to explore the city on your own. Overnight in Sarajevo.
Day 8
Srebrenica - Belgrade
Today we travel to Belgrade (Serbia) by stopping first to visit Srebrenica. Continue to Serbia and Belgrade, arriving in the late afternoon. Belgrade is the largest city in the Balkans, and is an intriguing mix of the traditional and the modern, with its museums, galleries and lively nightlife. Overnight in Belgrade.
Day 9
Belgrade
We explore Belgrade today, taking in the temple of St Sava, the parliament buildings and Republic Square. We then head to Kalemegdan Fortress, the oldest part of Belgrade, where we explore on foot. This afternoon we take a cruise on the Danube to see more of the city’s sights, before some free time to explore the city on your own. Overnight in Belgrade.
Day 10
Matckat Village - Zlatibor
Continue to Zlatibor, an area of valleys and forests where we spend time walking around the local villages and enjoying the stunning scenery. Overnight in Zlatibor.
Day 11
Biogradska Gora National Park
Today we cross into Montenegro – a hidden gem in the heart of Europe where nature rules. Biogradska Gora is an isolated area of forests and mountains which surround nine glacial lakes, known as ‘mountain eyes’. We take a short walk around the park’s only low-lying lake, and then have the opportunity to swim in its crystal clear waters. Later we continue to Kolasin where we spend the night. Overnight in Kolasin.
Day 12
Durmitor National Park
Explore Durmitor National Park with its breathtaking scenery of mountains, forests, lakes and high pastures. This area is inhabited by many species of birds and animals, and we may see eagles, white-headed vultures, foxes, deer or chamois, a type of mountain goat.
Day 13
Ostrog – Lovcen – Razem
Visit the Ostrog monastery, with chapels set in a sheer rock face and linked by beautifully decorated caves, passages and stairways, before heading to Lovcen National Park. We end our day in Cetinje, an important historical centre dating from the 15th century and the cultural and spiritual heart of Montenegro. Then continue to Razem, where we can have a walking tour of local outdoor attractions including caves, a waterfall, and hazelnut forest. Overnight in Razem.
Day 14
Lezhe - Durres
After breakfast drive to Lezhe. Later we continue to Lezha where we visit the mausoleum of Skanderbeg and the castle before heading to Durres. This port city has the largest Roman amphitheater in the region (20,000 seats), dating back to the 2nd century built during Trajan Emperor rule. Visit archeological museum, amphitheater, roman Baths, Byzantine Bazar, etc. Overnight in Lezhe.
Day 15
End of the tour
After breakfast depature to onward journey